NDSU earns classification as one of nation’s top research institutions 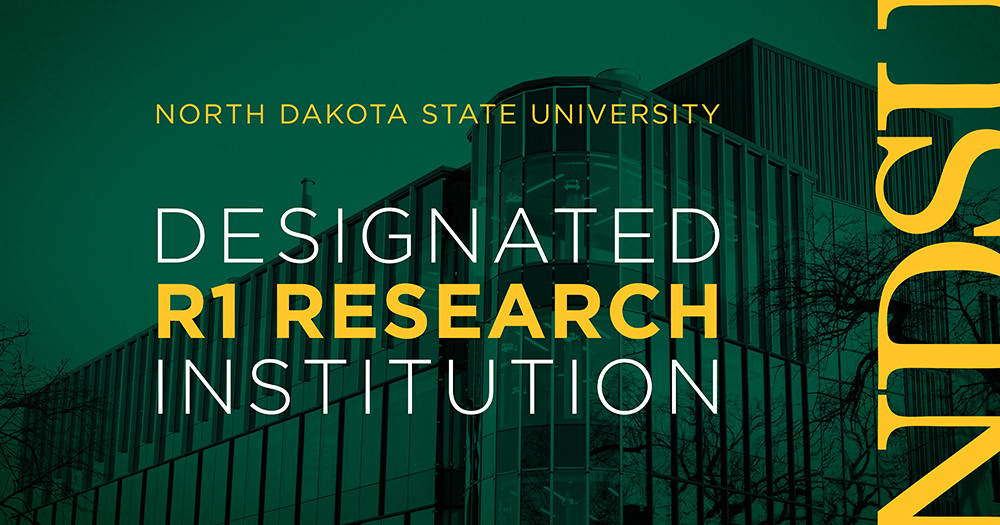 “This is national acknowledgment that, at the highest performance level possible, NDSU is making the world a better place and helping to diversify North Dakota’s economy,” said NDSU president Dean Bresciani. “From new crop varieties to cancer research, NDSU researchers are simultaneously confronting the most pressing issues of our day and bolstering our state’s economy.”

NDSU vice president for research Colleen Fitzgerald said recognition like the Carnegie R1 classification is due to excellence in the range of disciplines across campus, not just one area. “As NDSU continues to grow its research expenditures and reinforces its strategic stewardship and return on investment to North Dakota, the strengths of a balanced portfolio approach will position us to take advantage of new possibilities on the federal front where we align with national priorities,” she said.

NDSU Provost Margaret Fitzgerald said the designation provides leverage in recruiting and retaining world-class research faculty, who in turn draw students. “In addition to creating the best environment for high profile faculty, the recognition also helps us in attracting talented students to the state who desire to be part of the important research our faculty conduct at NDSU,” she said.

Since 1970, the Carnegie Classification has been the leading framework for recognizing excellence in research activities. Using an empirical process, it compares and groups accredited and degree-granting institutions.

An R1 ranking indicates that a research institution is operating at the highest possible level which will, in turn, attract high-quality faculty and students and assist in obtaining prominent, significant research grants.

Carnegie’s list is updated every three years and considers a range of statistics, including each institution’s research expenditures, the number of doctorate degrees conferred and the numbers of faculty, post-doctoral and non-faculty research staff. From the data, an institution’s research activity index is calculated to determine if they are part of the elite ranking.

Research expenditures represent the costs of experimental activities that occur with a goal of discovering new information. They are a common metric used in university research as they are a clear indication of the amount of research occurring at an institution at a given time. Carnegie examines each institution’s expenditures in science, technology, engineering and mathematics (STEM) disciplines as well as in non-STEM disciplines such as humanities and social sciences. NDSU’s overall research expenditures have risen more than $10 million over the last three years to $156 million in the last fiscal year alone.

In addition to expenditures, the Carnegie classification examines the number of doctoral degrees conferred by an institution in humanities, social science and STEM fields along with other areas such as business, education and public policy. NDSU conferred 139 doctoral degrees in these areas during the last fiscal year. Finally, the number of research staff, including faculty, post-doctoral researchers and research staff, is considered in an institution’s classification.

The most recent designation is preliminary and will be finalized following a six-week review period.

“The researchers at NDSU are creating new knowledge and ideas and delivering them to our students and the citizens we serve, who are then taking them into the world and improving society,” said Bresciani. “This is the true fulfillment of the promise of our land-grant mission.”

For more information, see the Carnegie Classification of Institutions of Higher Education.

As a student-focused, land grant, research institution, we serve our citizens.