‘This will tell a story’ 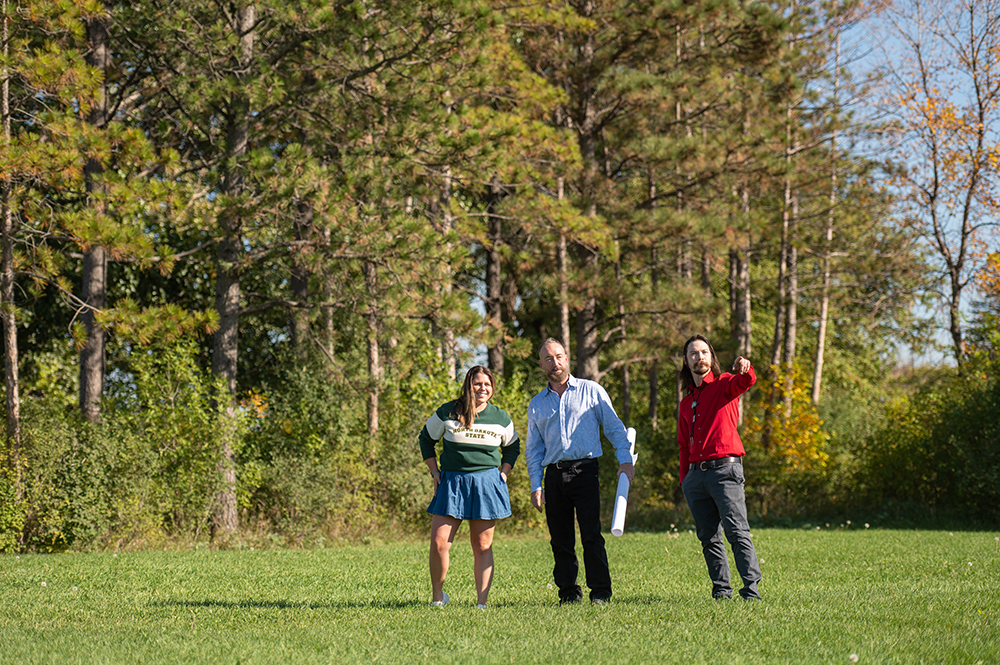 NDSU students have collaborative, hands-on experiences that can make a lasting impact on campus.

Landscape architecture alumna Morgan Kollman and fourth-year student Xantippean Lonewolf are working alongside faculty member Matthew Kirkwood to redesign the Grandmother Earth’s Gift of Life Garden, which honors Mother Earth and the Indigenous people who have walked with her for generations on the land that now is North Dakota, South Dakota and eastern Minnesota.

The Grandmother Earth’s Gift of Life Garden was initially planted in 2009 with native North Dakota plants. In October 2020, due to construction on its previous site, the garden was rededicated at a new and larger location proximal to the NDSU horticulture research and demonstration gardens on the south end of campus.

Early in the redesign process, Kirkwood brought in Kollman and Lonewolf to collaborate on designing the space and expanding its original vision. The landscape architecture department encourages students to work on both hypothetical and real projects in its studio courses.

“It’s neat as an educator to see students develop these skills,” said Kirkwood, who is responsible for the project’s copywritten design. “As a professional landscape architect, it’s great to work with students like this. It’s fun to have the synergy of all of us working together. That’s powerful and really rewarding for me.”

Redesigning the garden presented an uncommon experience of scale and creative freedom for the students. It also challenged them to learn the cultural significance of the garden and integrate elements important to the community into the new design.

The group learned a lot throughout the course of the project through research and feedback from people on campus and in the community. Each element of the design was incorporated with purpose.

“Doing things with intention and respect and just getting a better understanding of how important land is to those communities is a big reason why I wanted to be involved in this,” Kollman said. “This is something I really take pride in, because this is a beautiful design that is going to intentionally and respectfully showcase everything that all these reservations have to offer.”

“For me, it was a way to give back,” Lonewolf added.

Many central elements of the proposed garden design are expected to be completed by fall 2022. These elements include rhythmic mounding, stylized dirt mounds that imitate the crescendo of drumbeats as visitors walk from the entrance to the center of the garden.

A central pavilion is proposed to be built as a Medicine Wheel, which symbolizes health and the cycles of life in Native American culture. The Medicine Wheel will would include paths leading in from all four directions.

The team also designed a proposed structure resembling the framework of an earth lodge. Earth lodges were a common sight on the plains and important for some Indigenous peoples. The framework is being refined by Kirkwood to artistically incorporate a three-dimensional focal point to the central gathering space.

Plans call for natural flora from the state of North Dakota to be planted into the garden, including sacred and medicinal plants.

“There’s always a secondary or tertiary purpose for what we’re doing here. It’s not just about aesthetics, it's about the education and the cultural significance,” Kollman said.

The group hopes the final garden will serve as a space for education and engagement for NDSU, the state and region.

“Native Americans tell a lot of stories, that’s what they do to pass on from generation to generation,” Lonewolf said. “And this will tell a story.”